One card is chosen by the spectator. It matches the prediction

Effect: The magician shows a deck of cards, shuffles them, and spread them face down. One prediction card is placed aside or given to a spectator to hold.

“Let’s IMAGINE, the cards are all shuffled, but each four of a kind are amongst each other, so here are the four aces for example, here the four queens, etc.! Can you imagine that?” the magician asks.

The spectator can imagine it and now he is asked to select a card, but to make it really fair, he is asked to call a NUMBER between (let’s say) 10 and 40. ANY NUMBER is chosen and the magician openly, slowly and FAIRLY counts to the chosen number and removes the selected card as well the 3 cards besides it as being an imaginary four of a kind!

Trust us as we say: This IS a #how moment!

But… You now say, you have imagined that these were the four aces and as you say this, you turn over the 3 removed cards. They are BLANK, as they are removed from your mind, an imagination doesn’t last long…

You now get the remaining of the deck and turn them over and show that EACH and EVERY card is a BLANK card!!! HOW, HOW, HOW….

#HOW comes with a red or blue Blank Bicycle deck + necessary gimmicks and streaming instructions. Ready to perform! 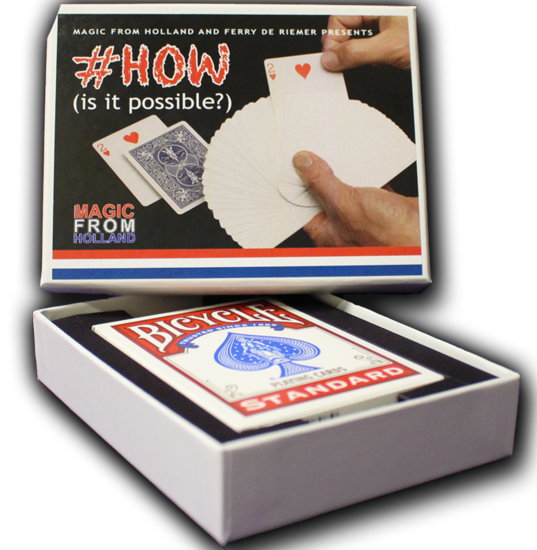 Thank you for purchasing #How by Ferry de Riemer. You should have received a code inside your package. Use this code to unlock this tutorial video. Enjoy!